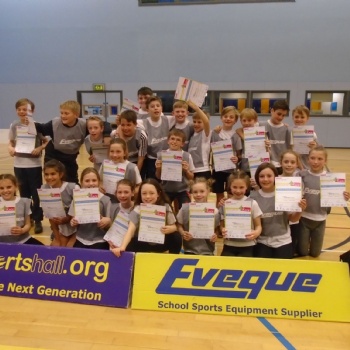 Year 5 and 6 Sportshall Athletics team won the district competition back in March, therefore, represented the district in the County Finals on Tuesday this week. This took place at Elmbridge Leisure Centre in Walton on Thames. It began with a opening ceremony in which all the teams paraded with their school flags and took part in a fun warm up. There were twelve districts competing in the Sportshall Athletics competition, which included six track and six field events. Our team of 24 children performed extremely well against some very large schools. We did particularly well in the field events, finishing 4th overall in the county, and just two points behind the bronze medallist. Congratulations to all the children who have trained really hard and supported each other so well as a team.